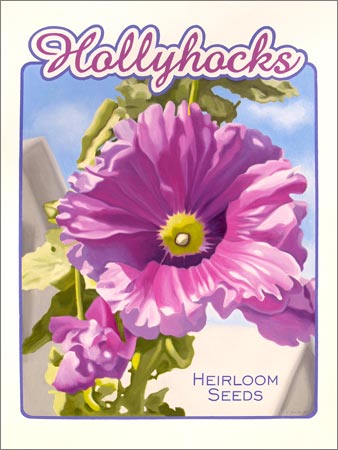 Many years ago I was seasonally employed at a greenhouse. While the pay was minimal,  the weather ever-changing, and the concrete brutal on the feet, it did surround those of us there in a profusion of saturated color that gave my phosphenes a healthy kick. I had made one of the biggest art sales of my early career (through an arts admin to an HMO) during that first season but know one knew; I was just another worker slug that restocked trays and trays of petunias and pansies day after day after day.

All of which is a digression; although this painting was inspired by that time, by the seed packets that could be bought inside the store, this is the actual story of the Heirloom Hollyhocks:
Later working (once again) as a graphic designer, one of my clients mentioned that she planned for the Grand Opening of her boutique to give away seeds packets from her Uncle Olav's (or maybe it was Uncle Gustav's) heirloom hollyhocks in a commemorative package. Misinterpreting her email as request for a design of the package, I sent her something along these lines (as a model I used this hollyhock in my backyard garden). As it turns out, she had already commissioned her niece to design the seed package which would be printed in black on a green paper. The niece's design had a nicely hand made look that was really far more appropriate than my overly-commercial layout.

Was I a bit disappointed? A bit, I suppose, but over time one gets used to these sorts of misunderstandings. I sighed, moved on, and a few years later painted this based on the seed packet idea because I still thought it was a fun idea, and I got to use some of my rusty lettering skills from another previous profession (sign painting).

In a lovely bit of synchronicity, it turned out that a co-worker at that same greenhouse ended up owning this painting. I am so happy it has a good home.
.
.