Photoshop Tips: 6. Reducing the appearance of glare in dark areas with Contrast/Brightness 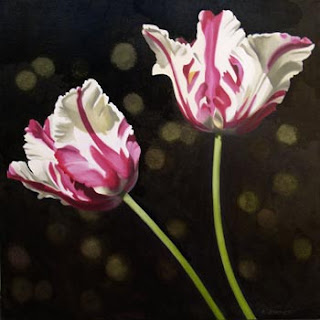 The best way to avoid having to deal with glare in photo editing is to avoid it when photographing.
Try some of the photo suggestions that appear in the Index posting to eliminate this issue.
(Final edited image above: Parrot Tulips, oil, 24"x24")

Occasionally, though, you'll be in a hurry, photograph without checking, the painting goes out the door, gets sold... and the only record you have is a photo with glare-- as in this sample in the tutorial below. For those instances, here's a method that might help minimize the effect of glare at bit.
The Magic Wand Tool

With the Magic Wand tool, select the areas of glare that are most noticeable. (As in past tutorials, I've included a second 'control' image to the right, to help show the change.) In this case, it's the upper and left background. Select 'contiguous' on the upper toolbar to select only pixels that touch each other (otherwise it will select pixels all over the image). You can adjust the tolerance as needed; 32 is the default, it is set at 20 here. You'll see a dotted line around the area as you select it. To select more area at the same time, hold down your shift key while continuing to click on areas with the Magic Wand. 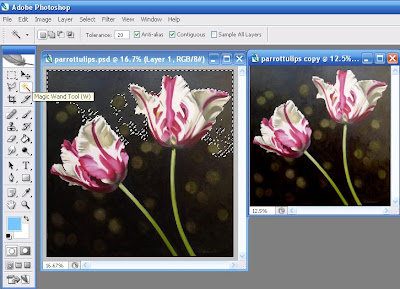 In the top toolbar, choose Image/Image Adjustment/Brightness-contrast. To darken, move the brightness pointer to the left. In this case I've reduced the brightness by -14. This allows the background to blend in with the dark areas at bottom and left with no noticeable line. 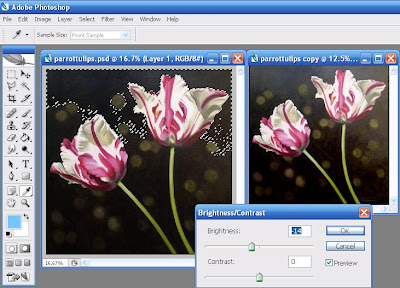 Release the selected area, and you'll have your result. If you get a 'line' or the fix doesn't blend in smoothly, undo (Ctrl+Z), try again, and adjust your increments. 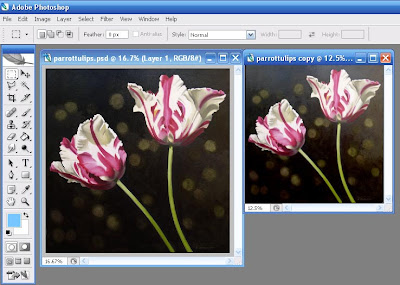 Here's another example of glare correction, and thanks to Sheila for allowing me to experiment on her fine portrait of a Tibetan Monk. 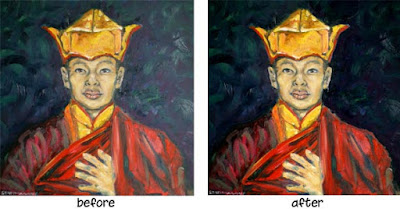 "Tibetan Monk" by Sheila.
This took a few extra steps, but was well worth it. Here's one more little tip that will help you-- when you use that Magic Wand in image with mixed shades, it's going to miss a lot of the lighter areas in the background. So while holding done your Shift Key, click that a few times, moving around to pick up more pixels, and then if you need to pick up strays, switch to the 'Lasso' tool (while still holding down the Shift key)-- it's right next to the Magic Wand. Move your mouse in a loop around the stray pixels, and then make your adjustment with Levels or the Brightness/contrast.
Posted by r garriott at 7:39 AM