Photoshop tips: 4. Hue: How to Correct Color with the Hue/Saturation Command 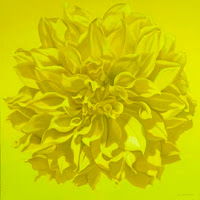 Just to show that the pros don't always get it right, either! I took this painting to a professional photo lab and paid to have a good image of it put on CD. I have to admit I was dismayed when I got it back-- my lovely chartreuse dahlia (seen at left in the final edited image: Sunny Mandahlia, 30'x30") was now leaning seriously into orange--!
(I have the feeling that digital cameras are programmed to shoot a full spectrum of color; when given a monochromatic image, it 'confuses' the interface and it tries to make up the difference, with sometimes odd results.)

Using Hue to edit and refine your artwork photos.
In the sample below, I've opened the original file and made a duplicate layer to edit on, as before. For the purpose of the tutorial, I've made a second 'control' image to help show the changes in progress. 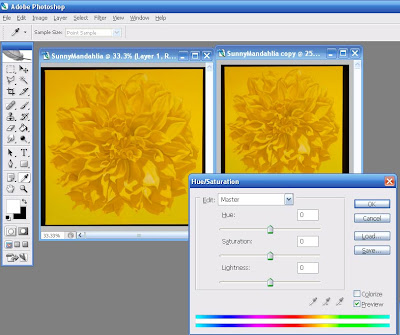 To begin, click Ctrl + U (Cmnd+U for Mac users, or Image/Adjustments/Hue-Saturation on the top toolbar. This will bring up the Hue Saturation dialog box. 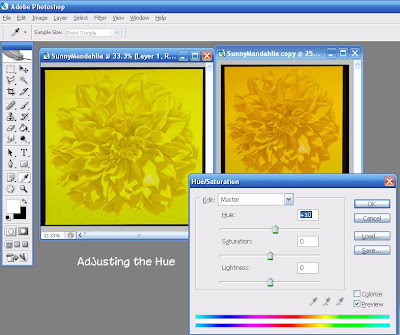 For this image, which I want to be less red and more green, I've moved the Hue slider to the right. Notice it doesn't take much; I've only gone from 0 to 10.

Note that the Hue adjustment method tends to work better on predominantly monochromatic images like this one; if your artwork encompasses more than a short range of color you may get some surprisingly interesting (if not useful) results.


Originally when I set this tutorial up, it was to show how to correct the color shift using the Green and Red Channels in Levels. While this can be done, I found that in this instance, using Hue was much more expedient. I'll revisit the issue of color adjustment with Levels at a later date, with a different image.
Posted by r garriott at 12:28 PM